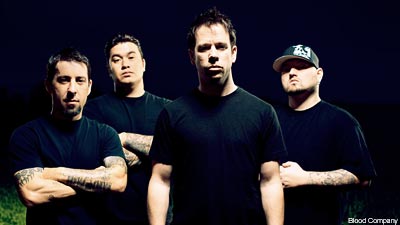 A lot of music videos in the recent years -- particularly since troops were deployed to the Middle East -- have addressed the war, and Living Sacrifice's video for 'Rules of Engagement' from their forthcoming album, 'The Infinite Order,' does just that. What sets 'Rules of Engagement' apart, however, is how it deals with Post-Traumatic Stress Disorder and how the psychological syndrome deeply affects young men in military service.

"This song has to do with the impossible situation that some of our military are put into these days. They are fighting an enemy that looks like the civilians they are also trying to protect," guitarist/vocalist Bruce Fitzhugh told Noisecreep. "There are no uniforms, and you cannot trust anyone. It is just hard to help a people when you have to be suspicious of them at the same time. The video treatment by Robby Starbuck has to do with an institutionalized young soldier ... that is dealing with [PTSD]. I think the ending is a bit metaphorical, when the soldier, who is running from the pressure that seems to be crashing down, breaks through to the open air and freedom, to see the sun setting. And then he has peace."


The video not only features a plot but performance footage, as well. Performing the song in multiple takes certainly kicked Living Sacrifice's butt! "I really like the live performance shots that Robby did with a Red camera, I think," Fitzhugh said. "The final colorization looks killer, in my opinion. Performance-wise, this video nearly killed us. Fake playing and fake singing the song 25 times was way worse than playing a show. And I kept 'singing' under my breath without realizing it, which totally jacked my voice. But all in all, it was a great experience with talented dudes."