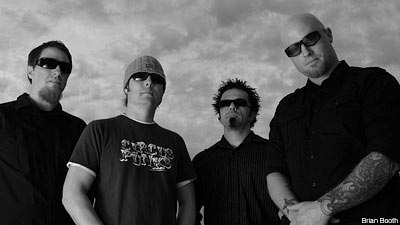 In 1991, Christian thrash pioneers the Crucified were on their way to being something bigger and stronger than just an influence within the Christian underground -- they did inspire and pave the way for bands like Living Sacrifice, after all. But when the band released their album 'Pillars of Humanity,' they were hoping to get on bigger stages. "We wanted to be the next band. We wanted to be Pantera. We wanted to be the next thrash band that was pushing the envelope and was hard and heavy," drummer Jim Chaffin told Noisecreep of what he recalled drove the band during the time before they broke up.

"We wanted to do something that we could push over the top and break into the mainstream market that bands like Norma Jean and As I Lay Dying have done now," Chaffin said. But unlike the majority of accepted faith-based heavy bands today, the Crucified were known for a forthright boldness.

Chaffin recalled wondering if that was going to hold the band back, saying, "It was just a matter of if people could get over what we were saying, but we've always been big advocates about that. If you're going to sit there and listen to 'Satan this' and 'Satan that,' and say 'Do what you want' and then we get on stage and do what we want, how can you get mad at us? We're not telling you what to do. We're just telling you who we are."

During this time, the band did get to share the stage with many of the heavy hitters of thrash, and none of them took any issue with the band's religious beliefs. D.R.I. never even noticed. "They had no idea who we were or what we were doing. I don't think they paid attention to what we did, because they asked us to get girls for them," Chaffin laughed. "The road manager was all giving us 12-packs and saying, 'You wanna go get some girls for the guys?'" The band laughed it off and explained that this wasn't something they did. "It was a culture shock for us."

But when the Crucified opened for the almighty Pantera, things were a little different, but in a good way. "They were really cool. The guys actually talked to us," Chaffin said, reveling at the memory of that night and mentioning how both bands' vocalists, Pantera's Phil Anselmo and the Crucified's Mark Salomon, spent a good deal of time talking -- and how bassist Rex Brown sat stageside during their entire set. "They gave us tons of props on stage, which was very encouraging to us."

The band never even took any heckles or sneers from the crowds at these shows, but they also kept it short and sweet. "It wasn't our audience, and it wasn't our time. It wasn't our place to spend 20 minutes talking," he remembered. "So we just got up and played our songs."

There was one discussion that Chaffin recalls where the band did talk of toning down the Christian scripture within their lyrics and approach. It was before a showcase for major labels and possible producers for their next album. "We had talked about it is a band. 'Should we not say anything? What should we do?'" The band played as they always did. "We weren't going to try and be somebody else and then get on a major label and say, 'Oh, we're a Christian band.'"

At night's end, the big producers and label reps were unimpressed. "I don't know if it's the way we played or what," says Chaffin. "We packed out a Hollywood club on our own, and they still weren't impressed."

Recently reformed last year after 19 years, the Crucified have re-released their 'Pillars of Humanity' album. This was the album during which the band buried the remnants of their original punk sound. Many fans cried an old tune. "We had a pretty big punk following in L.A., but then we started playing more thrashy tunes and people began saying, 'Oh man you guys are sellin' out.'" But the band didn't take the turn to crossover trash just out of hopes to get new fans. "To be honest," Chaffin confessed the evolution of the band was truly organic. "We just learned how to play our instruments better."