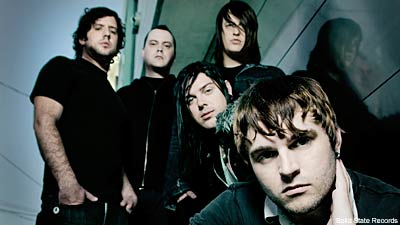 Concerning the issue of reuniting a defunct band of his -- Eso-Charis -- Norma Jean frontman Cory Brandan is humorously clear on where he stands. "I have other things I do, so that's kind of pretty low on the list," Brandan admitted. "Washing my car might be above getting Eso-Charis back together. Waxing my car seven times in a row might be better."

Eso-Charis was a metalcore band signed to Solid State Records. They put out one full-length, which was produced by Living Sacrifice's Bruce Fitzhugh and a seven-inch record. They disbanded after Brandan joined Norma Jean and two other members joined Living Sacrifice. Besides an active family life, Brandan is in two other side projects, Fear Is the Driving Force and the Radio Sky -- so the prospect of reforming Eso-Charos seems dim.

"I think it might be fun to play those songs again, maybe," Brandan continued. "But it's like me in the middle of three other dudes that all hate each other. I don't know if they hate each other. I can't say that ... they'll get mad at me. It's not going to work. We're all different people now. Honestly, I think it would be in vain to do that. If I'm not doing Norma Jean, I want to be with my family. If I'm not doing that, everything else becomes a hobby."

Returning to the subject of auto care, Brandan gave a brief history of his vehicle -- and if its condition is any indication, we would have to wait a good bit of time before he starts getting Eso-Charis back together. "I got it in 2005 and it was awesome then," he reminisced. "I don't know what happened between then and now. It's pretty messed up. Oh, a hail storm happened. That really screwed up my car. Like baseball-sized [hail]. It had little bitty dents all over it. It knocked the antenna off. It broke the window. I still haven't replaced it."

And the car can only get worse, being in Brandan's home base of Arkansas. If there's a tornado, there's usually hail around it. "We have a lot of tornadoes. You could actually just be driving, and it's like, 'Oh, it's kind of sprinkling.' Then hail! I've seen it before, out of nowhere. You just hit a random patch of hail."

Norma Jean are set to release their new album, 'Meridonial,' on July 13.