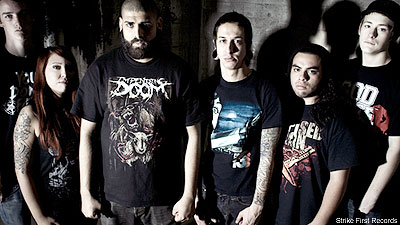 The Great Commission are currently in between tours right now, but earlier in the year while on the Abominable Snow Tour, the Southern Californian band received some criticism because of a few of the bands on the tour. "We've been actually getting a lot of flack from Christians," vocalist and leadman Justin Singh told Noisecreep, "asking why we would tour with non-Christian bands. I believe that one of the testimonies that Jesus came here to do was ... unite people."

The Abominable Snow Tour was a "mixed tour," as Singh labeled it, of Christian and non-Christian bands, but that fact hasn't caused a problem as their critics might believe. "I've done tours with Christians bandswhere some of the bands didn't get along," Singh said. "But on this tour especially, everyone's loving each other, getting along, helping each other out. There's been no issues. Everything's been going great."

Not only did the bands themselves get along, but Singh noticed that their audiences were more well-behaved than most have seen. "There hasn't been a lot of fights on this tour. A lot of kids have been getting along," he explained. "The pit especially -- it's cool to see a lot of different kinds of kids get together, and not one band has had a walkout on this tour, which has been amazing. We've been on other tours where certain bands got huge walkouts, like over 100 people. They've been watching every band every night, giving them respect."

The tour package's eclectic offering wasn't limited to belief systems, either, and extended into the band's music. "You've got an old-school hardcore band like Shai Hulud," Singh said as he began to rattle off the lineup. "You've got a tough guy band like Lionheart, you've got a legendary metal band like Living Sacrifice, you've got War of Ages: metalcore, and you've got us -- which we don't even know what we are. We just write heavy songs, heavy worship -- that's what we would call it. And it's all mixed up, but it's cool because there's diversity every night."

The Great Commission's latest effort, 'Every Knee Shall Bow,' is out now on Strike First Records.