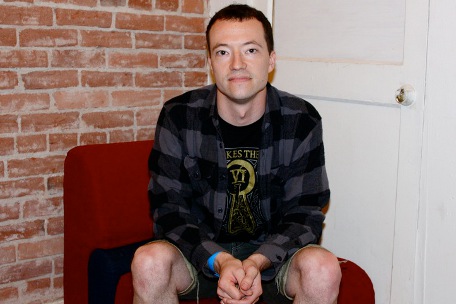 Since 2007, Los Angeles-based Touché Amoré has been at the head of the (real) screamo revival; a post-hardcore sensation that thrives due in large part to its charismatic front man, Jeremy Bolm. Last year's Parting the Sea Between Brightness and Me album found a spot on countless year-end album lists and Touché Amoré's sweaty live shows are already the stuff of punk legend.

Just today, Touché Amoré announced a new live EP recorded at the famed BBC Studios in London, England. Noisecreep sat down with Bolm backstage at the The Glass House in Pomona, Calif. to talk about it.

Jeremy, tell us about the new EP.

Well it's called Live on BBC Radio 1 and it's coming out on Deathwish Records. We did a UK tour with La Dispute and recorded the session with them, which was cool, because I don't think the BBC has ever had two bands come in like that and do back-to-back sessions. What made it really cool is us and La Dispute have a split 7 inch record out there where we sing on each other's songs. And since we were there that day we recorded one of those split songs and that will appear on the new live EP. Jordan from their band sings on it with me.

The sound on the new EP must be great, coming from those studios.

It really is. The overall production is just amazing. This is the BBC so they did a really good, quality job on it.

It must have been an honor to record there.

Very much so. It's so storied there, where The Smiths and Joy Division and the Beatles - think about that. So I mean, we felt out of our element in one sense, but still got caught up in all the excitement.

Your fans seem deeply connected to you.

One of the best things about music, punk and hardcore especially, is if you find that world in general appealing, it's because it accepts you as an outsider or someone who is different. I's a real community. A lot of the lyrical content for so many bands really speaks to the fans on a personal level. For us it gets very personal - and if some kids are going through some tough things, they can attach themselves to our lyrics and maybe those songs can help them relate.

On the other side, I love that a lot of what some of the fans might be going through, is completely opposite what I am singing about. But they interpret what they are doing in their own way. We have a song called "Home Away From Here" which is a very cut and dry song about finding comfort when you're on tour - where as I used to miss home, now I miss touring when I'm home. But then I'll meet someone who will tell me, that song helped them get away from their home town and maybe go to college for art or something, or to take chances in life. That's just so cool that that can happen - I sing about one thing, and someone puts a new meaning into it when they hear it. I just love that.

Do you remember the first show you ever saw growing up?

I was in about sixth grade and I saw a battle of the bands at the high school - there was a band called Envy of Eden, sort of a gothic industrial band that was pretty bad, but I remember being just blown away. I'd love to know where they are now. The first real concert was 1995, David Bowie with Nine Inch Nails, which really amazed me. 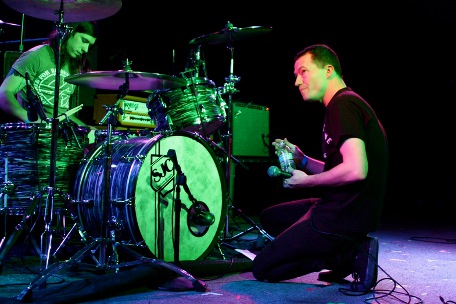 The Live on BBC Radio 1 7" EP will be out soon via Deathwish Inc. Get more information at this link. Catch Touché Amoré out on tour on the following dates: