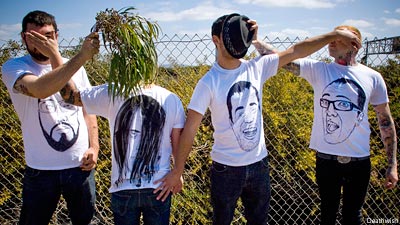 The 'Axe to Fall' tour is one of the most intense tours around this year, but the first casualty has been marked: Lewd Acts. The San Diego band has been a tucked away secret of noise and shunning of the metal shrieks of modern hardcore, not known to head out East and all all points surrounding -- so their slot as support for Converge has been highly anticipated. However, it seems as though inner tension has driven the band to head home.

"Bands are fragile, volatile things and not everyone wants to do a band to this exent [sic]," the band said in statement. "We will be going home to regroup and refocus. We will keep everyone updated in the near future. We still love this music and at this point, that's all we know. Once again, THANK YOU to everyone who came to a show, bought a shirt or cd, sang along, talked to us, shared a house, or helped us in any way."

The band breaking up is only a rumor and Lewd Acts clarify that. Touche Amore have taken the open spot for the rest of the tour.

But this is not the only misstep for the tour, as Converge just suffered the death of their van transmission, forcing them to miss them to miss two shows and leaving Coalesce to headline.