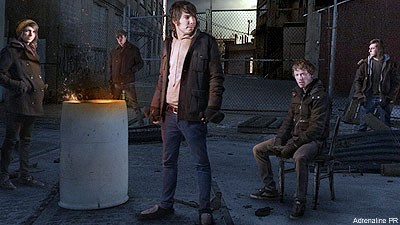 Killer Lyrics: I see the hurt wolf covered in insects / Just pray our ghosts will learn to forget / I'm putting up the fight of my life

Lancaster, Pa. metalcore band This or the Apocalypse just released 'Haunt What's Left' on the Good Fight Music label, and like any good metal band, vocalist Rick Armellino grabbed inspiration from a very old and very metal source for the song 'Subverse.'

After hearing the first demo for the song, Armellino immediately began constructing the lyrics and vocals in his head. He, though, was unsure of the direction it was taking when the time came to finally track the vocals with producer and engineer Josh Wilbur. "At first I was like, 'Josh this is practically rap, this isn't going to work, 'while he was still bouncing in his seat and pumping his fist with excitement," Armellino explained. "He was stoked we were getting closer to having something even farther removed from the genre norms and gave me a little faith in the idea.

"I had the chorus in my head the whole time and when I finally got it out of me," Armellino added. "I felt like I could rest for the first time in months, it was the something I didn't know I could do. I'm definitely the most proud of this track." Performing the gang vocals were Century, Armellino and Grant McFarland's other band. The spoken passages were done by a room full of people, including some of Apocalypse's girlfriends.

As for the meaning of the song's lyrics, the message is rather dour, as Armellino explained, "When I think about our stupid history, all the war, all the hatred, I have no optimism for our people. I try to be something new, different, but in the end I'm really just another guy that's fully capable of any of the same ills."

This or the Apocalypse will be touring all summer with the likes of Gwen Stacy and Satyricon to support 'Haunt What's Left'.

Download This Or the Apocalypse Songs
Filed Under: this or the apocalypse, ThisOrTheApocalypse
Categories: News
Comments
Leave A Comment
Back To Top