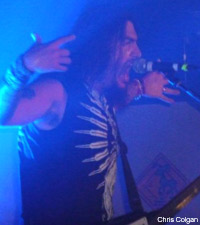 Youv'e got to hand it to Machine Head -- they know a thing or two about overcoming adversity. Written off by both Roadrunner Records and much of their fan base in the beginning of the decade, they succeeded in winning both back, with Roadrunner re-signing them in 2004. And the release of their epic 2007 album, The Blackening, gained new fans and picking up old ones. So when their Canadian Carnage Tour with Slayer and Megadeth was postponed due to Tom Araya's back injury, it looked like they might have to cancel their sole U.S. headlining show of 2009, scheduled for Nov. 6 at Long Island, N.Y. mainstay The Crazy Donkey. Fortunately, the Bay Area band was able to honor their commitment six days later, storming a club they'd last played 14 years prior.

Two and a half years into the touring cycle for 'The Blackening,' Machine Head have gotten used to playing 40 minute sets, having done stints on the Mayhem Fest and opening for Metallica, among others. The Crazy Donkey show gave them a chance to flex their live muscles before joining up with Megadeth later that week. And flex they did, playing a 90-minute, 13 song set spanning their 15-year career. After well-received sets from openers Mutiny Within, This or the Apocalypse and Thy Will Be Done, the 850-capacity club was at a fever pitch as the headliner launched into 'Imperium.'

All the time Machine Head has spent on the road has obviously paid off for them. The band was firing on all cylinders throughout the performance, which was being recorded for broadcast on SiriusXM's Liquid Metal channel (or 'Serius,' as a sign the club taped up around the room said). Guitarist Phil Demmel had promised the show would be "insane," and they delivered, with the set encompassing their entire career and featuring songs from all six of their albums. 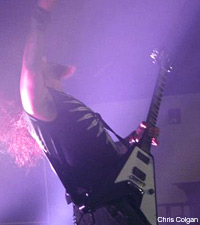 Vocalist/guitarist Robb Flynn seemed grateful, recalling the last time the band had been at the club and thanking the audience for making it out to the rescheduled show even though "you have work or school tomorrow." While they'll have toured for three years by the time the cycle for 'The Blackening' is done, the Crazy Donkey show will likely be remembered by both the band and fans as one of their most memorable shows.

'None But My Own'

Filed Under: Machine Head, MachineHead, Megadeth, Mutiny Within, MutinyWithin, Slayer, this or the apocalypse, ThisOrTheApocalypse, thy will be done, ThyWillBeDone
Categories: News
Comments
Leave A Comment
Back To Top