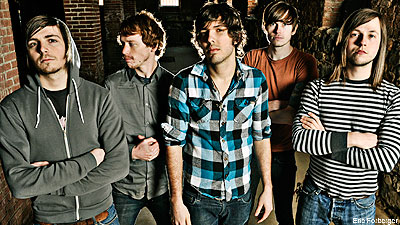 This or the Apocalypse have posted the brand new song, 'Charmer.' It's a tense, urgent slab of noisy and moshy metal that will hand your ass to you on a paper plate -- so clench up! 'Charmer' appears on 'Haunt What's Left,' which is due out June 22 on Lifeforce.

"Being one of the flashier tracks, 'Charmer' became a darling song on the album pretty quick. It's one of the angriest things we've ever done," vocalist Rick Armellino told Noisecreep.

TOTA dug a lot deeper on 'Haunt What's Left,' taking their time to create an album that they are happy with. "The new CD is about two years in the making," Armellino also admitted. The band used the technology at their disposal to make it work. "A lot of it was demoed in the van while we were touring by using our MacBooks. All of us play guitar and can piece together stuff in Logic pretty confidently."

When the band finally got time off, they got down to business. "We locked ourselves in my house to play dozens of ideas as a band and start figuring out what would go on the record," Armellino said. He also wasn't shy about the fact that the album is an audio document of his emotions and his life, warts and all. "When I hear this album, I know [what] I felt. I was furious. I was a mess. After we got the final mixes, I could carry on as the easygoing guy that I want to be. This album was a chance to just celebrate me at my worst and I'm proud of it," he said.