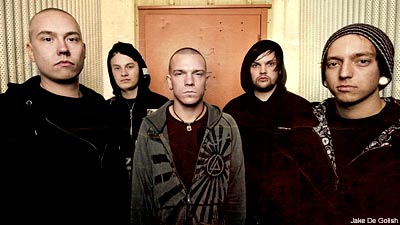 Finnish metal mavens Circle of Contempt will hit U.S. shores as part of the Over the Limit Tour with As Blood Runs Black, Oceano, Arsonists Get All the Girls, Tony Danza Tap Dance Extravaganza, Thick as Blood, Burning the Masses and Blind Witness, with This or the Apocalypse and Son of Aurelius on select dates. TOTA will be on the July 23 through Aug. 8 run, while SOA will appear on the Aug. 9 through Aug. 21 dates.

"Since this is our third time coming to the States, we're not planning on doing anything specific like sightseeing," guitarist Risto Matti Toivonen told Noisecreep. "The last few tours covered the whole of North America pretty well, so we got to see the mandatory monuments, buildings and cities. We're really [looking forward to] being in the States now that it's summer and there's no crazy winter hurricanes like last time." But warm weather is only part of America's appeal for these Finns. "I also want to get a bite of that delicious Chipotle burrito," he said.

The Circle of Contempt tour dates boast quite the eclectic lineup, with none of the bands being truly in one another's wheelhouse. "I wouldn't say our live set is comparable to any other band's live set," Risto said. "Especially the bands that are on this tour bill. We're planning on going crazy with cool samples in and in between songs. Also, we are going to play a separate instrumental intro that is not on the album. We are just trying to keep the intensity level high throughout the whole set."

Risto also revealed the best and worst things about the touring lifestyle, saying, "My favorite thing would be to meet all the amazing people you wouldn't meet anywhere else ... whether it's tour bands or just people who come to the show. Being from Europe, coming to [the U.S.] is like getting a month-long vacation to see the whole North America and to play your music for hundreds of people. My least favorite thing would definitely be the long drives and the fact that you have to sleep too many nights in the van."