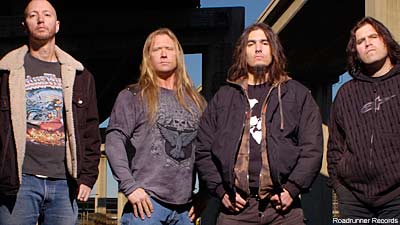 Bay Area metal masters Machine Head have announced their only U.S. headlining date for 2009 at Long Island, N.Y.'s Crazy Donkey on Nov. 6. Fresh off main support dates with Metallica, Machine Head will play the Long Island show in preparation for their forthcoming Canadian Carnage dates with Slayer and Megadeth.

For the one-off show, Machine Head have planned "a unique set list that promises to cover their impressive and controversial 15-year career." The controversial part no doubt referring to the Grammy-nominated band's run in with Disney in 2007, where their tour in support of 'The Blackening' was banned from several Disney-owned House of Blues venues, citing "violent imagery, undesirable fans and inflammatory lyrics" as the reason.

The Nov. 6 show -- which guitarist Phil Demmel promises "is going to be insane!!!" -- boasts Thy Will Be Done, This or the Apocalypse and Mutiny Within as support.

The show not only precedes a five-city tour through Canada in support of Slayer and Megadeth, but also a two-week U.S. run with Megadeth and a west coast stint with Metallica as well.