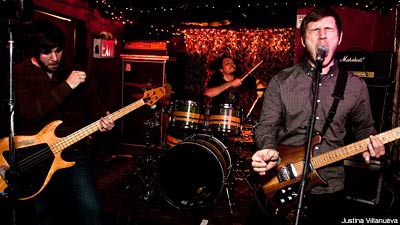 On Dec. 21, while New York City's ground was still muddy with snow leftover from a weekend storm, Torchbearer, Radiation Blackbody, Rising Up Rising Down and My America played a show at Lit Lounge.

20 inches of snow fell in the town where the band rehearses in Delaware, so the band had a bad case of "shoveller's back."

"Last time we played here, we forgot to play our new songs. So we're gonna try to make up for that today," he said. My America is kind of like a faster, meaner version of Young Widows. And yes, the noisy guys made up for it, whatever 'it' is.

After asking Lit Lounge promoter Curran Reynolds if they could play a couple more songs, Matt said, "We're gonna get back to the songs we know how to play."

The nine people who attended the show didn't mind the newer songs, but I'm sure it made My America more comfortable to play songs they didn't just write.

Then he added, "This entire set is dedicated to Tai. If you grew up in the '90s, you know what I'm talking about. Rollin' with the homies." It's not so often that metal bands are paying tribute to late celebrities, but thank the gods they didn't cover a Brittany Murphy song.

New Yorkers can catch the trio at The Charleston in Brooklyn, N.Y. on Feb. 18 with Wetnurse and Tiger Flowers.