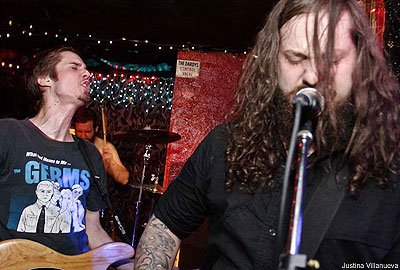 "We live in Orlando, but the funny thing is that 60 percent of the people who move there are from here," Khann guitarist Jake Smith told the crowd at Lit Lounge. The Floridians embarked on a two week tour with New Yorkers Tiger Flowers and ended up in the Manhattan basement on April 19.

Smith did most of the between-song banter while frontman Ben Rudolph recovered his much-needed energy. Rudolph was a shuddering bomb. Yet the crowd would not let him fully detonate. So he just kept bouncing off the wall of people and running back on the stage. That was until Tiger Flowers' frontman Jesse Madre jumped on his back and showed him how to force his way through the wall. 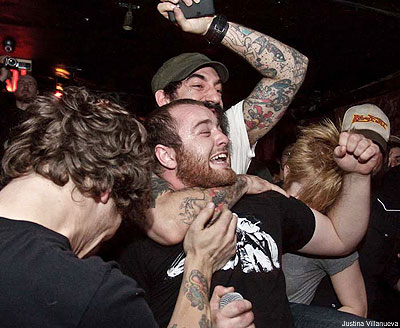 After giving a shout to the late Big L, Smith went on to thank marijuana and Tiger Flowers. They ended their set with what the band and audience called an epic one, 'Brain.' (Fun side note: guitarist Andrew LaCour is the brother of Trap Them bassist Stephen LaCour.)

If you've ever wondered what would happen if you mix weirdness of Discordance Axis with the brevity of Botch and the feeling you get after listening to Mastodon's 'Remission,' then Khann is the band you need to here. Look forward to a new Khann record as they just tracked a full album in Louisville, Ky. Also be sure to check out their 2007 release 'TOFUTOPIA,' which is available through Metal Blade Records. 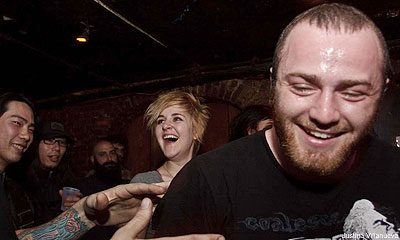