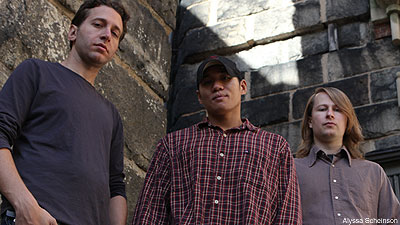 Flourishing vocalist/guitarist Garett Bussanick is also the guitarist in fellow New York City metal band Wetnurse. It's often said that some vocalists can't sing without playing guitar at the same time or that they can't play guitar and sing. Bussanick, however, isn't having trouble taking on different roles in different bands.

"I see my role in Flourishing as vocalist/guitarist as a completely separate idea from my role in Wetnurse as just guitarist, so I'm not able to prefer one over the other," Bussanick told Noisecreep. "Both roles allow me to experience and explore things that the other does not. Being Flourishing's vocalist does let me have a second medium to create with. I'm becoming very interested in vocals and want to expand and improve what I can do. I kind of see it as a frontier that has a lot of potential to color the music we make."

Flourishing's debut EP, 'A Momentary Sense of the Immediate World,' is out March 30. The band is still getting its live legs underneath it, having only been playing shows together for under a year. "I'm still fine tuning my approach. Although exhausting, I find it to be great fun to scream at people for 30 minutes," Bussanick said.

The reason he chose to do guitar and vocals in Flourishing was out of necessity -- and a desire for simplicity. "We weren't really looking to bring anyone else in," he said. "The three of us in the band have known each other for a long time, and the dynamic between us works quite well. I think bringing in a vocalist or second guitarist might make things more difficult and disturb the chemistry and specific vision we already have, unless we were to find someone very much on the same page as us."

Bussanick does partly wish for a second guitarist, since he writes and thinks in terms of multiple guitars, which means the band is often left with sections that they can't recreate live with their manpower. "There is a song that will appear on the impending full-length that won't be able to be played live while keeping the intent of the song," he admitted. "There is often no one, main guitar part, and all the layers come together to create the whole. If I was to just 'play one riff,' it would not be representative of the idea and wouldn't sound like the song. But with all that said, I think keeping it as a three piece is ultimately for the best."