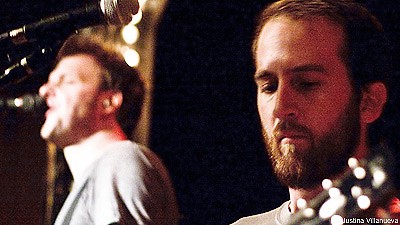 Justin Foley from the Austerity Program -- who also played on May 2 at Union Pool -- was already digging through his red and handy toolbox to give the fellow guitarist a new string. "What size do you need?" he asked. But for some reason, Moses needed Mike from Phantom Glue -- the band that opened the show that Sunday night. 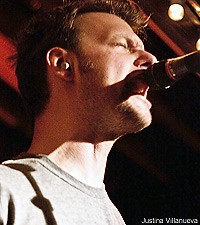 Disappearer's Metal-Archives page stamps the band with the genre 'melodic atmospheric sludge.' Normally, that would be a reason to make fun of them. C'mon! Really? A genre doesn't need that many modifiers. Yet, after watching Disappearer, I can't find a better way to describe them myself. Their set was heavy but it was also a bit dreamy like post-rockers Caspian.

If you are a fan of Big Business, My America, Torche or even the Austerity Program, be sure to check out the band's debut album, 'The Clearing.' It was released in 2009 on Magic Bullet Records.