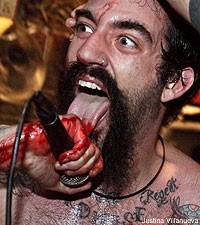 The four men who make up Tiger Flowers are really busy these days. They've been tracking songs for their EP, playing a ton of shows -- like playing with Premonitions of War and the Red Chord on April 25 -- and to top it all off they have consuming day jobs.

Luckily, the New Yorkers have acquired a manager to take care of their daily band needs (like answering interview questions). So we here at Noisecreep present to you an interview with Tiger Flowers' manager Tommy Golland.

What's taking so long! What has the recording process been like?

I wish I could tell ya, honey! These f---ing guys have been dragging ass if you ask me! Ya got Willy in there slapping the bass like he's filling in on 'Seinfeld,' Dan keeps tracking his drums and then throwing them out because the tones aren't "Pantera enough." Who the f--- Pantera is, I don't know! Dean's got issues with the miking of his cabs. He keeps saying, "I don't hear dragons!"

If you ask me, they all have been hitting the bottle way too much, but what does a mensch like me know? Am I right? And Jesse, where do I start? With his tea and that damn Native American flute player that he's hired to follow him around. I mean come on! You think I had to put up with this bulls--- from Captain and Tennille? No! I didn't. They were professionals. And that's why they went somewhere! Here we are six months later, and we got four songs that sound like four a--holes f---ing their instruments like they were related to 'em!

How do Tiger Flowers arrange time to rehearse, record and play shows? Basically, how do they find time to be a band in New York.

I got these guys booked in the music building in Manhattan on 8th and 38th, right? All I tell them is you gotta practice, you gotta write. These guys get together and run through the set then wanna eat sandwiches and talk about Hall & Oates! I tell 'em, "You think Hall & Oates did this s---?!" No! They didn't! I know this cause I booked them both at the Adelphi in Philly in 1967! They were in two different bands, the Temptones and the Masters or the Baters. I forget. Anyway I introduced them to each other after gunfire rang out between some rock gangs. Terrible, but look what came of it: HITS! Anyway, I diverge, these guys find time because they live the dream. In a dream world, if you ask me, haha. Am I right?

In a year's time I've seen Tiger Flowers four to five times. I think the band has played in the N.Y.C. area twice as many times as that in the last 12 months. What has been your favorite show? Who are your favorite bands to play with?

I know what my favorite show was. It was '77 at the Whiskey. An electric night where I first caught a glimpse of the machine Van Halen. I leaned over to my buddy Gene and said, "These guys got it!" And they did. I'm always right. Well, except with [Tiger Flowers] so far ...

Tiger Flowers usually end their set with 'Drag.' Why is that the song of choice?

I wish I could answer that. I keep telling these guys, "Leave 'em feeling happy." You know, something nice to send them off with, but no. Jesse's always trying to kill himself and everyone else in front of him. You got Willy using his bass like a lumberjack uses an axe. Dean lets that Gibson feedback until your ears are bleeding and Dan is just pounding on the drums like they insulted his mothers matzoh. After you hear that song, you just wanna stop listening to music. If you can even call it that. I don't know how I got involved with this.