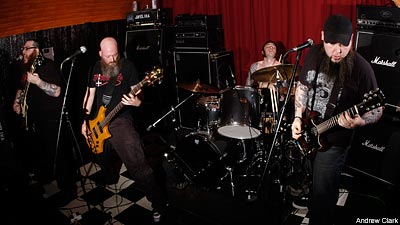 After spending the end of their summer training new drummer Joe Hienricks for tour and releasing their second album, 'Beasts Among Sheep' via Translation Loss, Javelina are back home in Philadelphia. Thanks to their nasty, doomy and feedback-ridden blend of thrashy noise, the band may as well re-christen their city of origin as the City of Brotherly Sludge!

"Our livers have healed, and it's back to the practice spot to write a new batch of songs," vocalist/guitarist Chubbs told Noisecreep. "I think we're all very relieved that the lineup change worked out, because replacing a band member is a big headache on its own. Then going on the road immediately after, you just wonder, 'Will we all get along?' Fortunately it all worked out fine. Joe is just as stupid as the rest of us, and that is crucial. So definitely more writing and touring in 2010!"

WIth stupidity firmly in place, Chubbs claims that he and his bandmates are ... aspiring rodeo clowns. Rodeo clowns? You don't say! Well with a little tongue in cheek, Chubbs admitted, "I think we have all been intrigued by the sport of rodeo clowning. It's a lot more in depth than you might think. There is a lot of training, exercising, choreography, planning. The list goes on and on. You can really get hurt, and those bulls don't get most of our rodeo clown jokes. Actually, they get very mad at clowns in general, but we have it better than rodeo mimes."

Producer Sanford Parker was a big part of the album and the finished product that is 'Beasts Among Sheep.' Chubbs said, "He worked with us, and he had the attitude that this record has his name on it, too. So he pushed us, but not in a way that made us uncomfortable or angry. He also understood that whiskey makes us sing better, and he exploited that. The long and short of it is that Sanford works hard and plays hard, and so do Javelina. As far as musical concepts, I think we just wanted to step it up a little from the first album, and I think we did. Lyrically, it's all up to interpretation. If you find some hidden spiritual meaning you're totally right."

'Beasts Among Sheep' is out now. In Philly and beyond.