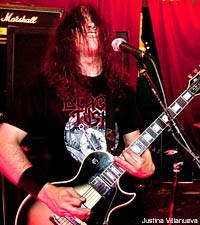 Brooklyn, N.Y. venue The Charleston is smelling more and more like a sewer everyday. But that hasn't prevented people from getting wasted and watching some super awesome and angry acts. Bands like Kylesa, Rorshach and Weedeater have played secret shows in the low-capacity venue. Wednesday night marked another awesome secret show when Black Cobra headlined and made the basement shake with Black Tusk, Javelina and Batillus.

"We got merch for sale. We'd much appreciate it. We're broke as f--- and a long way from home," one of the Black Tusk members announced. It's the story for most underground bands on tour. Yet, for as hard as Savannah's Black Tusk rocked out, they deserved their entire trailer of merchandise to be bought.

With the exception of Batillus, every band that played made highway sludge with a blackened and sometimes hardcore attitude.

Two or three songs into Black Cobra's set guitarist Jason Landrian announced loudly and quickly, "We're Black Cobra from San Francisco." That was about the only banter the duo proved for the crowded basement. It only took a couple more psychedelic riffs after that to get everyone pushing each other. For being a band that I've wanted to see for a long time, Black Cobra delivered a satisfying amount of songs. Yet, after the antsy crowd demanded one, the Californian two-piece did an encore.

After a week of more dates with Black Tusk, Black Cobra will embark on a two-week tour with Pelican. Be sure to check out the band's latest release on Southern Lord Records, 'Chronomega.'