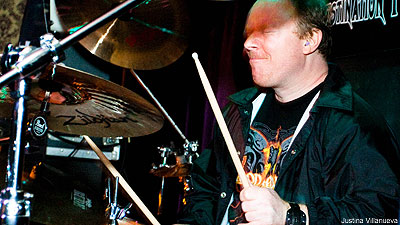 What started as just a CD release party for new band Charred Walls of the Damned -- featuring Richard Christy and Tim 'Ripper' Owens -- on Feb. 2 became a party to celebrate iconic metal legends Judas Priest's winning of a Grammy. The scenario: a bunch of old friends jamming a song by one of their favorite bands of all time at a local bar. Except that one of those friends (Owens) was in that iconic band for two years, and that local bar (Fontana's) was packed with many fans and metal industry professionals.

Drummer Richard Christy -- who was also in Death and Iced Earth, worked on 'The Howard Stern Show' and is the founder of Charred Walls of the Damned) introduced each band that played that night, including the Judas Syndrome and Javelina. When it was the Hixon's turn, he thanked the band for letting him get wasted and pass out in their cars after hosting the last Hixonfest. That is when one of the members of the band corrected him, saying, "You mean the last three." 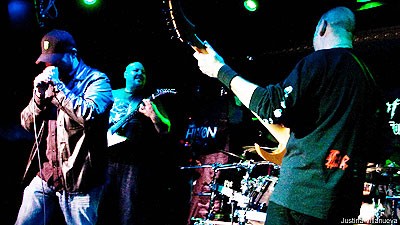 After an energetic set from the South Jersey-based band, Christy and Owens got on stage. This time it wasn't just for an introduction.

"It's like the Nelsons with a retarded brother Tim," Owens said about the band who was ready to play Judas Priest's 'Living After Midnight.' The well-done cover put everyone in a really good partying mood.

"He's gotta be up early. I don't. I got a flight to catch later on. So let's drink some alcohol!" Owens said before heading upstairs to do just that, drink some -- or, likely, more than some -- alcohol.