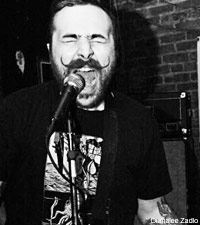 In spite of a last-minute venue change and the resulting lackluster crowd, Woe tore through their set like men possessed, churning out hypnotically intense black metal destruction from their critically-acclaimed debut 'A Spell for the Death of Man.' Frontman Chris Grigg introduced the last song with tongue firmly in cheek, exclaiming, "This song is about being fucking miserable. Enjoy!"

It was tourmates The Atlas Moth who truly shone that night. They sounded absolutely masive -- their feedback-drenched space jams spiraled off into rapturous psychedelia as often as they dredged up the dirtiest Dixie sludge, filling the joint to the rafters. Their set drew heavily from their Candlelight debut, 'A Glorified Piece of Blue Sky' and made it all too apparent why they got snapped up by the prestigious label. This is a band to watch, no doubt about it.

Javelina closed out the show with a typically ferocious set, including a handful of new songs from their vicious new record 'Beasts Among Sheep' and tearing up the stage with their riff-rockin', beards-out Eyehategod-meets-Motörhead-meets-crust punk stoner stomp. Javelina are ugly as sin and heavy as hell, and that's what makes them so unspeakably awesome. Catch the Atlas Moth and Wetnurse on tour, buy their merch, smoke them out, and check out the new releases by each band -- the Atlas Moth's 'A Glorified Piece of Blue Sky' is available from Candlelight Records, and Wetnurse's 'Invisible City' is out now on Seventh Rule.