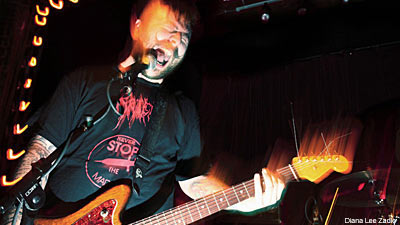 The Atlas Moth hail from Chicago, but at this point in their budding career, they feel as at home in a van as they do on the streets of the Windy City. The psychedelic doomriders have criss-crossed the U.S. multiple times in the past few years, and this time around, they were hauling ass down those 99-odd miles of bad road alongside brothers-(and sister!)-in-arms Dark Castle and Wetnurse to preach the good words on their Candlelight debut, 'A Glorified Piece of Blue Sky.'

Noisecreep first caught a glimpse of the not-so-elusive Moth in Philadelphia (sharing the stage with Javelina, Woe, and, of course, Wetnurse at Club Polaris on Nov. 11) and, after being blown away by their stellar performance and mega levels of raditude, this writer and a photographer friend decided to hop in the van and see what kind of trouble we and a quintet of long-haired riff worshippers could get ourselves into. 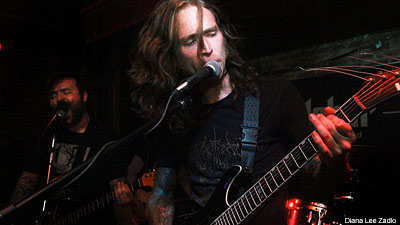 After a night filled with cheese steaks and Shakira videos and a groggy afternoon spent traipsing through wild West Philly to procure coffee and hot showers for some tour-weary bones, we all piled into the Mothmobile and headed down south, destined for the Side Bar in Baltimore (or Bodymore, Murderland, depending on who you ask) on Nov. 12. A couple hours and a whole lot of Lee Moses, Captain Beefheart, and Entombed later, we were packed into the itsy-bitsy venue, soaking in the instrumental epics of local progressive metallers Isthmus.

Tourmates Wetnurse kicked out the jams as always, and the Atlas Moth filled the tiny space to the rafters with their massive amps and soaring, psychedelic doom. 4th Horseman closed out the night with a spastic, noisegrind assault that cleared most of the long-suffering regulars out of the bar and left us wishing we'd brought earplugs to combat the decibels. A hit-and-run by an intoxicated, sass-mouthed Baltimore resident left us stranded by the side of the road waiting for the cops to roll up and delayed our trip back Philly-wards for a good hour, but no one ever said life on tour way easy! 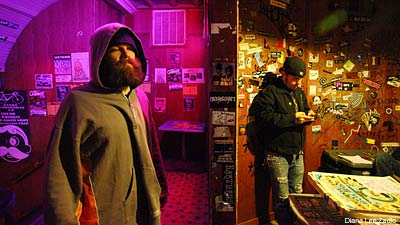 "We totally sludged those thrash kids' brains!" an excited text message from bassist Alex 'Beetle' Klein greeted me the night after their Nov. 15 Allston, Mass. gig with labelmates Ramming Speed. That, alongside a drama-filled night in New Brunswick on Nov. 13 and stage-dive-fueled Providence show at the Sweatshop Nov. 14 sent the boys back my way with high hopes for their BrooklynVegan-sponsored New York City date on Nov. 17. The Union Pool played host to grinding hardcore troupe Tiger Flowers and megalithic doom duo Dark Castle as well as the Wetnurse/Moth collective, all of whom did their best to wreck the place by pure sonic force.

The crowd soaked up every riff and raw-throated roar, and it seems pretty safe to say that the Atlas Moth have truly made their mark on the East Coast. The packed Brooklyn, N.Y. venue was a far cry from the tiny basement they played on their first New York City sojourn in 2008; a handful of successful tours and an incredible Candlelight debut later, the Atlas Moth have finally taken flight, and who knows how high they'll soar?