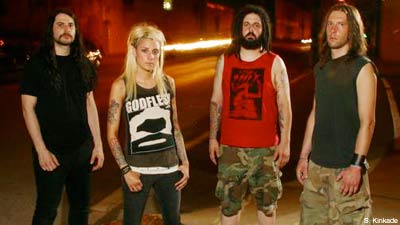 Howl's 'Full of Hell' is one of the most anticipated album releases from the Relapse roster this year, and the Providence, R.I. metal act just debuted the first tracks from it on their MySpace page. 'Jezebel' and its intro piece, 'Asherah,' are just a taste of the record, which was recorded at Machine With Magnets studios (Battles, Clap Your Hands Say Yeah, Lightning Bolt, Daughters) in December and January. Guitarist Vincent Hausman had told Noisecreep that the band "really tried to incorporate the various styles in metal we love, though never losing sight of what this band is ultimately about: the almighty riff."

Howl will be back on the road with a dense number of dates around the Texas area, hitting up several South by Southwest shows, including the Relapse Records showcase on March 17. The band has also been confirmed for New England Metal and Hardcore Fest and Maryland Deathfest, taking place later this spring. Some of their shows are shared with Tombs and Bison B.C. but the majority of the two-week tour are with Javelina.

Relapse reissued Howl's self-titled debut in July 2009, and will release their debut full-length on May 11 in North America and May 17 for the rest of the world. Pre-orders are available.