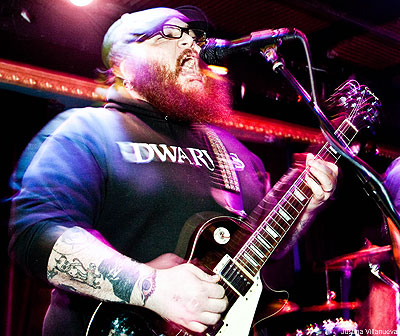 When a crowd requests an encore, it's usually a comforting compliment for the band playing. But when that band has run out of material to play, it can also be awkward -- which was the visible feeling Javelina members had when they played Fontana's on Feb. 2.

The Philadelphia-based sludgers cannonballed through a hell of a powerful, yet short set. It was so good that it sent the crowd into a frenzy. The entire 150-capacity basement screamed, "One more song!" and "Do it again!" which left the four-piece with no choice but to just play one more tune.

"I think we're going to butcher a song we just wrote. We didn't have time to practice another." 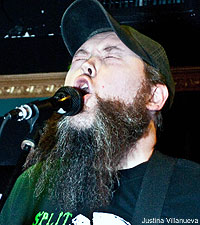 As the band was still deciding what to play, the bassist sarcastically suggested, "Or we can do a cover." But, the crowd was so antsy they didn't realize he was poking light fun at the Hixon's Judas Priest cover. And I guess the band didn't realize that once New Yorkers get to take advantage of the free beers at a Tones of Death party, they get really amped.

Either way, the night ended well. Javelina did not butcher the new song. And they left us with a new funny word to add to our vocabularies.

"We have all this music you just heard on CD, vinyl and stuff. Just head on to the back and talk to Mark. He's the one with the cock lips. Or whatever you call them in New York."

Check out Javelina's 'Beast Among Sheep' out now on Translation Loss. You can catch them on tour with Howl in March, when they hit up Virginia, South Carolina and SXSW.