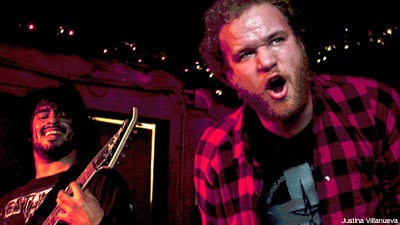 Back in September, I went to this tiny, crummy venue in Williamsburg, Brooklyn, N.Y. called Rockstar Bar. It was that Sept. 4 that I nearly pooped myself in public. No, I didn't indulge in some White Castle, post-hangover. I was scared. I saw a band that actually scared me, and they weren't wearing corpse paint or have any visible weapons. The band was called Unmen, and I just got my second chance to see Nov. 30 when they played the weekly Precious Metal Showcase at Lit Lounge.

After watching Unmen's damaging set, I realized I don't know anything about the band outside of their live show. So I spoke to Timm Sparks to learn more about these angry boys.

So do all of you you guys live in Jersey? Are you all from Jersey?

Yeah we're all from North Jersey in the same basic area. Three of us are from Essex County, and our drummer DJ is from Hudson County I'm pretty sure. We've basically all have lived in New Jersey most of our lives. It's a great place to live, because if you live here, you can deal with mostly anything.

What's the hardest part about playing shows in the city?

Well, we're really used to playing shows in basements where kids are flipping off of the walls and just basically getting really crazy. New York is a little different because we play at a lot of bars, and kids who want to go crazy have to keep in mind that they might knock over a fine young gentleman's expensive beer. Also, a lot of the time, there are a lot of people that are there just to be there and have no real interest in the music, just for the look around it. I don't know. People just take themselves too seriously. Don't get me wrong though -- there are great people in New York, and it's a great place to play. We have fun every time.

What other hardcore/metal bands from Jersey do you dig?

There's a bunch. I'll feel bad if I leave one out. Chainsaw to the Face, Doomsday Machine Schematic, Dystrophy, Black Kites, Stressed Out, Rip It Up, Burden ... lets just say there's a lot.

How did Unmen become a band?

About a little more than two years ago, Jeremy (our guitarist) and his friend Jeff called me up about starting a thrash band. We got together and we looked for a bassist for a little while until we found Josh, who played bass in an old sludge band I used to be in. Jeff knew a drummer, D.J. Ultimately, Jeff had some s--- to do with college, so he couldn't end up being in the band unfortunately. We kept writing songs, and we decided that our songs were way too slow. So after time past, we decided we wanted to play thrashy grindcore. And thus, the Unmen you see before you today. 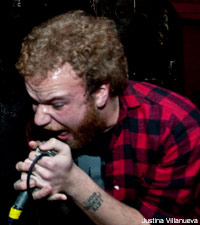 Are there any LPs or EPs available? How can people get them? Is that split with Led to the Grave available anywhere?

We're actually in the process of finishing up and mastering our first EP because our old recordings weren't exactly what we wanted, so we really don't have anything out yet. As for the Led to the Grave split, we're holding off on that for a little while because of recording problems.

Will you guys put out anything new soon?

Yeah besides the EP, which should be done within the next couple of months, we're trying to get a three-way split going between us, the Communion from New York and In the S--- from Boston. After that, we have a big, big project that's going to consist of four full-length albums, but that's a long way down the road from now. Keep your eyes peeled.

Are you aware that you look just like the vocalist from the Faceless? Doppleganger!

[Laughs] Actually I've heard it many, many times from everyone in my band and random people at shows. I usually get Seth Rogen more though. It always starts with 'Has anyone ever told you ...' and I immediately cut them off and say "Seth Rogen, anywho ..." and change the subject.