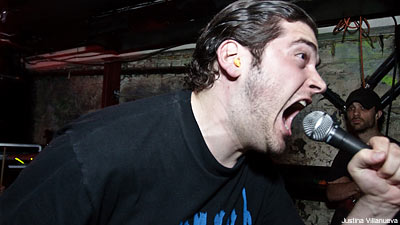 On May 2, the Communion played with Czech Republic's Ingrowing, Flourishing, Backslider and Buckshot Facelift. It was the Communion's first show since the death of their bandmate and close friend, Lee Altomare. Frontman Nick Cacioppo told fans and friends at New York City's The Charleston that Altomare would have wanted the band to "keep this thing going."

"Well, you're doing a good job!" someone responded. The band was only a song or two into their set, but it was a potent, swift kick in the face (i.e. it was good). The New Yorkers have a knack for making ominous doom-grind. Their set at Rockstar Bar (Weekend Nachos and Unmen also played) last summer scared the crap out of me, too. 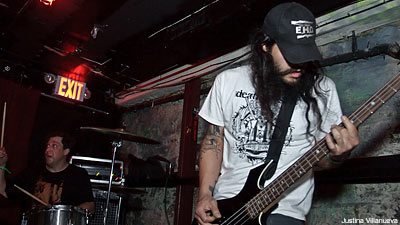 "We're our changing name to Kanalbrigade. So get your Analbrigade jokes ready! We're going to do ironic covers of Lady Gaga, too," Cacioppo said.

In a recent MySpace blog post, the vocalist expressed the reason for the name change. He said, "[Altomare] and I always said that if the Communion ever did a full-length, we would call it 'Kanalbrigade.' So as a tribute to [Altomare], we will be known as KANALBRIGADE."

Also in Altomare's honor, the quartet will be opening Maryland Deathfest at 3:30 PM ET on May 28. Their two New York shows with Bastard Noise on June 26 and 28 take place at The Cake Shop and Death By Audio, respectively. You can add Kanalbrigade on Facebook and MySpace.