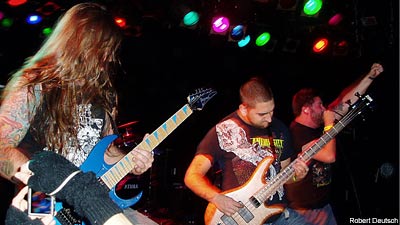 On Nov. 3, just hours after stepping off the plane in Los Angeles, the Black Dahlia Murder played a packed club on Hollywood's famed Sunset Strip to a much more intimate crowd than the band is accustomed to. Just as quickly after their set, they were back at the airport and ready for their late night flight to South America. With the recently-released 'Deflorate' out worldwide, apparently Ozzy Osborne was right: There's no rest for the wicked.

"With every record, we somehow alienate somebody," vocalist Trevor Strnad told Noisecreep. "But for the most part, feedback for every record has been better than the last. And with the economy being so bad, it's really cool to see people still coming out to shows and saying, 'Hey, this is the way I can support the bands I like' when they buy a shirt."

Say what he will about alienating fans, but The Roxy Theatre's crowd showed Strnad and his bandmates otherwise that night. The famous club was packed to the brim for a Scion-sponsored free metal show -- the second in as many nights, albeit halfway across the country for the Black Dahlia Murder.

Scion also held a similar event, again also featuring Boston's Revocation, at Atlanta's the Masquerade nightclub the day prior to much the same success. For Hollywood, though, it meant an RSVP guest list capped at 2,000 (for a first-come, first-served entry into the 500-capacity club) and a line equally as long. At over two hours just to get in for the Michigan metalheads' brief but brutal 45-minute set, the line was still down the block when the band began.

"This is for you bloodsuckers out there. And not that 'Twilight' bulls---! This is about 'Castlevania' -- now that's cool!" Strnad told the audience before launching into the video game-inspired 'What A Terrible Night to Have a Curse.' The band's penchant for humor and its seasoned showmanship were intertwined with live staples 'Statutory Ape,' 'Deathmask Divine' and set-closer 'Funeral Thirst' as well as an enthusiastic reaction to a bulk of the band's 'Deflorate' material.

The audience also approved most recent addition to the band, guitarist Ryan Knight -- now nearing his one year anniversary of joining the fold. By the end of the night, Strnad and his mates should've been reassured that no one in attendance disapproved ... except maybe when the curtain went down and the lights came up.

Having already been on the road for much of the fall alongside the likes of Children of Bodom and headlining with Skeletonwitch, Trap Them, and Toxic Holocaust, The Black Dahlia Murder is now back in South America before heading to Europe next year. "They're starved for metal down there, I think," Strnad told Noisecreep about the band's second trek across the continent. "When bands go over it's almost like hysteria. It doesn't make sense to me, but we're lucky as fuck to get out there. It's pretty epic." The band will return to The States in mid-December before departing to Europe for the travelling Bonecrusher Festival headlining alongside 3 Inches of Blood, Necrophobic, Obscura, the Faceless, Carnifex and Ingested throughout January and February.