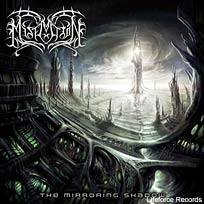 Swedish death metal band Miseration re-enter the scene with their sophomore offering, 'The Morning Shadow.' Pär Olofsson, an artist that Noisecreep 'covered' -- pun intended -- a few months ago for the work he did on Winds of Plague's 'The Great Stone War,' offered his artistic services for the Lifeforce Records band.

This cover represents a little bit of a departure for the Swedish artist. Most of his covers -- and indeed, most of the art he has created outside of the industry -- feature a human (or humanoid like an alien or demon). Most of the time, the human figure is the focus of the piece, while at other times, the presence is a little more subtle, as in the dinosaur-like skulls seen below the rising planet in the Faceless' 'Planetary Duality.'

'The Morning Shadow' has none of that, instead only implying the existence of intelligent life through the tower-like structure in the background, similar to his cover for Revocation's 'Empire of the Obscene.'

'The Morning Shadow' was released in Europe in November, but it will see a U.S. release Jan. 19.