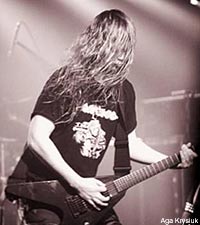 This summer, there will be a ton of festivals to keep fans drunk, sunburned and rocked, but what's the heavy metal fan who doesn't dig Korn to do? Enter the annual Summer Slaughter Tour, which always promises to be a more underground undertaking than the usual festival fair -- a tour for the more discriminating longhairs. And this summer's installment will be no different. The lineup features recently revived Polish death metallers Decapitated and tech death metallers the Faceless.

"I don't think those tours really compete for many of the same fans as Summer Slaughter," says tour founder and booking agent Ash Avildsen, of where Slaughter fits in with the Warpeds and the Rockstar Mayhems and the Ozzfests. "This is focused on underground extreme metal rather than mainstream metal. All of our shows also have air conditioning."

And you can't beat that with a bat. Also on this year's lineup are California deathcore outfit All Shall Perish, Massachusetts mathcore specialists the Red Chord, death metallers Veil of Maya, grindcore gods Cephalic Carnage, death metallers Decrepit Birth, Carnifex, instrumentalists Animals as Leaders and Vital Remains. Dates and tour routing will be revealed in the coming weeks.