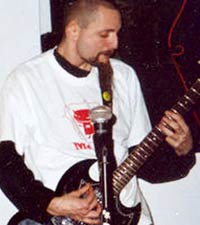 It is with a heavy heart that Noisecreep would like to extend our heartfelt condolences to the friends, family and fans of the Communion's Lee Altomare. The 33-year-old guitarist of the terrific, New York-based doom punk merchants passed away unexpectedly on April 16 due to complications from eye surgery.

The following statement was posted by surviving Altomare's surviving bandmates on their MySpace page: "We are all deeply wounded, white and shaking with shock, by this sudden loss of our great friend. He brought us all together. He brought out the best in us, enabled and encouraged us to be at our absolute best in music and life. I personally cannot imagine being where I am today without all Lee put together. ... I say all this with zero hyperbole, and those who knew him best no doubt feel the same way we do at this moment. Our hearts go out to his amazing family and all his friends, as well as anyone whose supported us in the last six years. Know that Lee loved, appreciated and cared about all of you very much, as do we. We'll miss you forever."

Bastard Noise also paid tribute to our lost metal brother, saying they will dedicate all June shows to Altomare's memory.

Unearthly Trance did the same , saying, "Lee was a guy that Jay and I both knew since the 1990's Long Island Hardcore days. I considered him an ally as we always were the ones who were at the sludge,underground metal,grind,doom etc. shows in the late '90s/early 2000 up until the present. Whenever I was at a killer show Lee wouldn't be far away enjoying the same band I was there to see. One of the first UT shows ever was in Lee's back yard and just as we set up with full stacks ready to blaze, the cops came. But my best memory was getting the opportunity to jam with him last year. We were going to do a sludgy hardcore band called 'nøwhere.' Well the project kinda went nowhere due to all of us being busy, but it was a great fun time. It was like jamming with no worries and just for the joy of it all. I'll miss you bro."

Helmsplitter also memorialized Altomare, posting "The metal underground lost another soldier yesterday morning ... Over the past year Lee and I had arranged for the Communion and Helmsplitter to release a split [seven-inch] record together and were working on setting up some dates on the East Coast for this coming October. People who live and die for extreme music are like family. Our friendship was short lived but I still cannot help but feel a little bit like a brother has died. Much sympathy and respect to his bandmates, friends, and family."

Altomare's parents also offered the following statement: "I want to thank you all personally for the wonderful comments and tribute about Lee. He was the real thing ... We don't want our son forgotten ... Please let him live through music dedications. Since he was a genuine, generous person, please pass that along to each other! I am going to miss him terribly. And you know what, if something in your life is going wrong, send him a little prayer ... I bet he is going to help you! Love to all, Lee's Mom and Dad, Joanne and Rich."