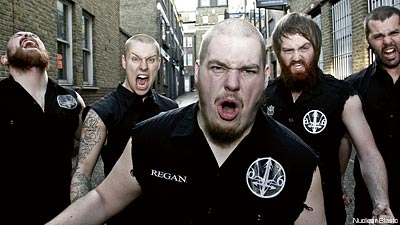 British death metallers Annotations of an Autopsy have cancelled their second consecutive U.S. tour the same day the tour was expected to launch in New Jersey. The trek also features the likes of Carnifex, Suffokate, Your Demise and Upon A Burning Body. According to a statement from the band, it wasn't visa problems that held them up this time, as they did back in November when Annotations had to pull out of a tour with the Faceless and Dying Fetus. This time, they just didn't want to do it.

"We, as a band decided against doing it; it's nothing to do with the bands. No, we don't hate America, we love you," the statement reads. "The reason being currently we are not in a place where we wanted to spend four months straight on the road, which is what it would have been with tour after tour."

The band continues, "We all have things going on in our lives at home currently that need our attention and family comes first. None of us were on the right state of mind to be able to spend that much time away at this moment in time we didn't feel we were ready for that much touring. So we pulled out to take some time off and spend some time with our loved ones."

While the band understands its American fans may feel slighted, Annotations of an Autopsy know they "have to do what is right for us. No, we are not splitting up or anything like that nor are we going on hiatus. The bottom line is we've toured our asses off and sometimes you need to step back and look out for yourselves. Thank you for all your support. It means a lot and we will be coming to the U.S. soon to make it up to you guys."