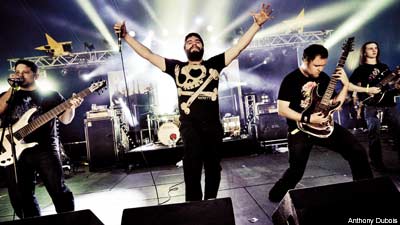 Oakland deathcorists All Shall Perish, arguably one of the forefathers of the deathcore genre, are releasing 2008's 'Awaken the Dreamers' for the first time on vinyl via Pure Noise on March 16. Metallica's Kirk Hammett actually listed the album as one of his Top 25 of the decade in Rolling Stone.

There's no better endorsement than one from the world's most famous metal band. "That was indeed a huge honor to have him notice, and we are very taken back by it. I plan on sending him one of our limited-edition colored vinyl as a thank you," rhythm guitarist Ben Orum told Noisecreep.

Hammett is getting an extremely rare item, since the vinyl is an incredibly limited pressing of under 1,000 copies. 100 of those copies will be clear with red splatter, and 100 will be splattered with gold and numbered and signed by the band, while 600 will be half black and half red. "We are very proud to be releasing 'Awaken the Dreamers' on vinyl," Orum said. "It is something we would like to do for all of our releases in the future. I, for one, am a huge fan of vinyl, from a collector's standpoint.

"I also love the way it looks, feels and plays. What makes vinyl special is how rare it has become, especially in the U.S. With bands only putting out a set amount of copies, they truly are collectible. We went out of our way to make a special-edition color for the die-hard ASP collector, because we know they are out there!"

In other ASP news, the band will support Decapitated and the Faceless on this year's Summer Slaughter run. "We are also riffing away and starting the songwriting process for a new CD," Orum said. "But we are taking our time on this record. We want it to be amazing, and not a rush job, like so many bands unfortunately fall victim too.

The vinyl version of 'Awaken the Dreamers' is currently available for pre-order.

Download All Shall Perish Songs
Filed Under: all shall perish, AllShallPerish, decapitated, faceless, Metallica
Categories: Interviews
Comments
Leave A Comment
Back To Top