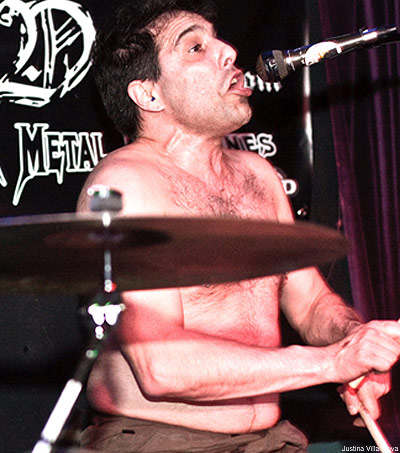 "I don't know what you people did with all that free beer, but I got f---ing drunk, man!" Those were the first words Rich Hoak said on April 1 when Total F---ing Destruction played Fontanas in New York City. The event was put together by Tones of Death and Revolver Magazine, who gather metalheads once a month with free beer and no entry fee. In New York, where a slice of plain pizza averages $3.00, the monthly show is a very special occasion.

For the Brutal Truth drummer's side project, Hoak is behind the kit the entire time he plays with Total F---ing Destruction. But that doesn't change that he's the frontman of the band. At that, he's one of the most animated drummers in metal. He leads each song with a story. As he's playing each song, it's like he's doing pilates on his throne, lifting his legs from time to time.

The band's set list was two pages long, but the actual time it took them to play all their short songs was less the amount of time than most people need to take a poop. The songs range from sociopolitical topics to some of the best jokes I've ever heard.

The only other show the band has set up for 2010 is May 28 -- which is day two of Maryland Deathfest.