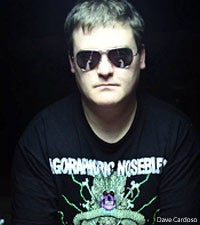 Filmmaker David Hall, who lensed a doc on Maryland Deathfest 7 and makes films based on full metal albums, has an interesting -- and initially terrifying -- history with metal! "When I was a kid, my best friend's dad scared me off metal with stories of Kiss eating feces off the floor and Ozzy Osbourne drinking buckets of communal spit and puppy blood," Hall told Noisecreep.

Luckily, those fantastical stories didn't permanently scar him and scare him away from metal for good. He revisited Ozzy in 1998, when he had an idea for a script that loosely involved the dove-biting one.

"I ordered 12 random metal albums from Columbia House that I, of course, never paid for, for research. And I've been hooked ever since," Hall said. "Gary Oldman actually read that script, and it was in Sharon Osbourne's hands at one point. Then 'The Osbournes' dropped, and I never heard from those people again!"

Even though his Ozzy-related script languished in development hell, so to speak, Hall found his calling by making metal-themed films that are truly underground and revolutionary. "I've always loved music, and I'm a musician," he said. "After I took a hiatus from filmmaking to be a stay-at-home dad, I decided to start making videos because I love videos, and it's what I know best ... It was something I thought would be a lot of fun to make."

He has his own production company, Handshake Inc., which features himself and partner Dave Cardoso, who handles all the photography and "is fast becoming a great director," according to Hall. The pair are currently working on videos for the Red Chord, Sacrifice, Jucifer and Drugs of Faith. "We have a film, a hybrid concert film/narrative feature, in post for

Jucifer," Hall said. "We're headed to Winnipeg, Manitoba, Canada to film Brutal Truth at the Manitoba Metal fest for a sort of mini-doc concert film, and this May we're making a sequel to MDF the movie."

They are also talking with Scott Hull of Pig Destroyer about creating a "psychedelic freak-out film" for 'This Comp Kills Fascists II," and Hall is trying to convince Wolves in the Throne Room to let him do an avant-garde film thing for them. "If I could work with Agoraphobic Nosebleed, the Locust, the Melvins and Pig Destroyer, I could hang up my metal hat forever and be happy," Hall said. "I'd love to do a film for the first Fantomas album, too, and I have this idea for an installation-piece based on 'The Pros and Cons of Hitch-Hiking.' You don't know how to get in touch with Roger Waters, do you?"