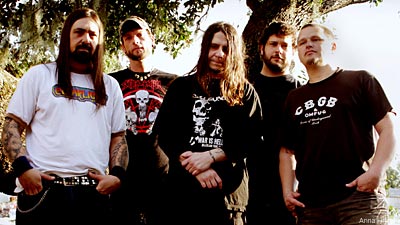 New Orleans' Eyehategod make metal that's sludgier than a NOLA swamp, and the band will finally tour the U.S. after a significant absent from the road circuit other than weekend warrior gigging.

"It's first U.S. tour in a long time, and while we've been doing shows all over, it's been regional in the South," singer Mike Williams told Noisecreep. "We'd fly out, do three days and stuff. We all have families and stuff, but this the first time we'll be in the van. It starts in Florida and ends in Chicago." Williams said the band is working on a West Coast jaunt mas well, so all you Left Coasters needn't feel slighted.

Williams is anxious to get on the road, saying, "I am super psyched, man. I love touring. It can suck and get boring, but that's the worst part and it's worth those couple hours on stage. We get along good like family, since we've been doing this so long." As for the band's return to the too-close-for-comfort van, Williams said, "We did Europe in a van, which we never did before. We used to have buses, but this saved us some money and we get to see countryside. It makes it hard to sleep, but we just get hotels."

On the back-to-back Chicago dates, the band will perform 'In the Name of Suffering' in its entirety one night and 'Take as Needed for Pain' in its entirety the other night. "We did both albums in Austin, Texas one night last week, and I am still tired from it," Williams joked. "We were on stage over two hours. At the end of the show, we came back and did three songs off 'Dopesick'! That was crazy."

Williams admitted that he doesn't know why the band chose those two albums for full plays. "I don't know how it came about. Probably drunken babbling, I guess," he said. Even though both albums have deep cuts the band has never played live, Williams and company aren't deterred. "I know we screwed up a few," he said about the Texas show. "I know I did. I know they did. That is cool. With Eyehategod, it's a mess anyway. It's a huge train wreck live."

With respect to new music, the band has a handful of new songs and will discuss what to do in terms of a new album when they get back home after tour.