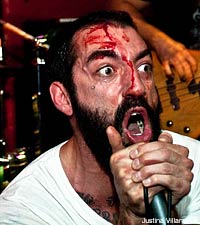 In 1926, Theodore 'Tiger' Flowers become America's first black middleweight champion. In 2010, this writer is hoping that New York's hardcore/metal scene's coolest unsigned secret band Tiger Flowers become champions of the world. Even though the band claims that the city can sometimes make that more difficult than one might think.

"On any given night there are six bands better than yours playing within a six block radius of you," vocalist Jesse James Madre told Noisecreep.

On Oct. 12, the foursome laid it really heavy on Precious Metallers. They opened the floor for arty-grinders Robotosaurus and mayhem-stirrers The_Network.

"What is this, your first day f---ing playing bass?" Madre said to bassist Will Gomez as he was tuning. Madre was too amped up to stop after each song. Like every Tiger Flower show I've been to, his energy infects the entire room.

When all instruments stopped playing their last song "Drag," Madre went into a trance. "And I'll pray for death before giving in. Giving up," he repeated until the words naturally faded. Madre later told Noisecreep that "[the song] is about the difference between big mouths and big hearts and what goes further. I think that is a general theme of the band. Being faced with a loss but to keep heading forward. To keep fighting."

Their set ceased when he slammed the mic on the floor. With his face covered in blood from angrily bashing the mic onto his forehead, Gomez asked Madre what happened to him. Madre seemed a bit confused at first. The post-show normalcy was still settling with the vocalist.

If you like Coalesce, Knife the Glitter and Botch check out Tiger Flowers. The band is currently recording an EP titled 'The Last Horse.'