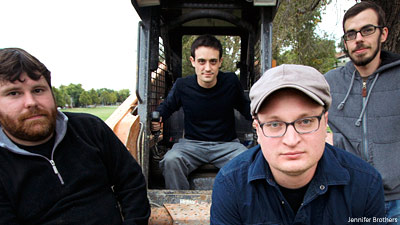 The mighty Coalesce have been relentless in activity since reuniting, including recording the acclaimed full length 'OX.' In all situations, taking a break usually means the end, which is why much space online has been in uproar since a statement from the band declared a hiatus in effect for the Kansas foursome.

Vocalist Sean Ingram told Noisecreep not to worry, though. "We are just home with no immediate plans is all." The band is in fact still fielding offers for future shows.

Since the 2005 reformation, the influential hardcore act has maintained a goal of keeping the band fun the second time around. Taking breaks to breathe in the home life has been par the course, anyone declaring this as more is looking for news where there is just an update to fans.

"It's been a fun couple of years," bassist Nathan Ellis wrote on the band's Myspace, decorating the entry with a tiring emoticon. "We've had excellent tours with bands we love (Converge, Harvey Milk, Torche, Kylesa, Atlas Moth, Gaza, Touche Amore, Black Breath), been to Europe, East Coast, West Coast, released a new record and a follow-up EP, played some great festivals and had the opportunity to see some old friends and meet a ton of new people.

"This is a good time for a break. Sean just bought a new house, Junior is starting his new business, Jes is putting the finishing touches on his PhD, and I'm going to sit on my couch and watch 'Shaun of the Dead.' Thanks for your continued support. Even if Jes put his thumb in your eye, I spit on you, Sean puked right in front of you and Junior gave you a sweaty hug."