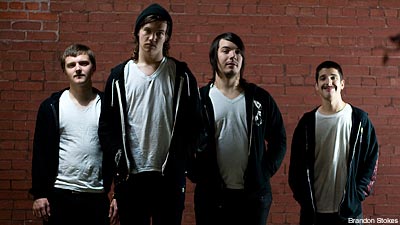 Take It Back! aren't holding anything back when it comes to their new album, the ominously titled 'Atrocities.' The album is "fast, melodic and passionate," Nick Thomas of the band told Noisecreep. "It's a lot darker than our previous release and is a lot less poppy.

"It's along the lines of Have Heart and Verse," he also said, referencing some like-minded bands. The band has released the first single, 'Hollow Eyes,' and 'Atrocities' follows up 2008's 'Can't Fight Robots' and hit shelves on Nov. 10.

The band is on tour with Four Letter Lie, Corpus Cristi and A Bullet for a Pretty Boy this fall.

Download Take It Back! Songs
Filed Under: A Bullet for a Pretty Boy, ABulletForAPrettyBoy, Corpus Cristi, CorpusCristi, Four Letter Lie, FourLetterLie, Have Heart, HaveHeart, Take it Back, TakeItBack, Verse
Categories: Interviews
Comments
Leave A Comment
Back To Top