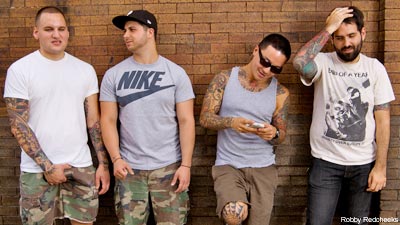 Life is full of first moments that can't ever be forgotten. In fact, these moments get cherished and put on a well lit mantel within the mind. Jay Pepito, the vocalist of Reign Supreme, told Noisecreep about his introduction to hardcore and how it still affects him to this day.

It all began with some records that came his way early on. "Hardcore started for me really young. I got a couple of records from my cousin," Pepito recalled. "One of them was Bad Brains, I think it was 'I Against I.' I can't remember, it was so long ago. And I got bunch of records all at once."

From there, Pepito wanted to find more bands. So he did what everyone did pre-internet. He read through the album's liner notes. "I remember trying to look at their thank you list and look at the band they would wear the t-shirts of," Pepito related. "And that's how I got into Minor Threat and Black Flag. I remember thinking Minor Threat were awful, which is kind of funny. But I remember thinking Black Flag was great. And they are still one of my favorite bands to this day."From there, Pepito went and checked out other kinds of bands, but they just seemed to be missing something. "After that I got into emo, but true emo like Cap'n Jazz and Mineral and all that kind of stuff. I liked the melody and the emotion in it, but it didn't have the anger in it that I wanted."

But then the day of his first hardcore show came, and everything changed. "I remember one day I got a copy of Turning Points' 'It's Always Darkest Before the Dawn.' And about a week later or so and my neighbor was asking, 'You want to go to a hardcore show with me?' I remember thinking, 'Yeah sure.' My brother used to like that stuff and I'll go check it out." Pepito laughed while reminiscing about his younger self; "I wore a Tortoise shirt, which I thought was really funny, because I thought that was so hip."

The show was Floorpunch, Breakdown, Ensign and some others -- a true show of fast, heavy hardcore. "I got thrown through the Pepsi machine! I got destroyed at the show," Pepito remembered. "It was the coolest, most awesomest thing I had ever seen because these bands were so urgent and so angry. They were guys like me. They weren't wearing makeup or mohawks. They were just dudes like me who saw something wrong with the world and wanted to pick up a microphone and a guitar, and rage. I totally related to it, and I knew from that point on hardcore was going to be my life."

Pepito said that he hopes kids will follow his harcore path -- scouring liner notes like he did with the records his cousin gave him years ago -- with the new Reign Supreme album, 'Testing the Limits of Infinite.' At the end of the record's layout, a wide-eyed list of almost 300 people and bands stands as the thank you list.

"It wasn't even as long as I wanted it to be, because Jake [Bannon] literally couldn't fit it all in," Jay says. "I wanted it to be this ridiculous 1998 Victory Records-style thank you list that would be an almost Dewey Decimal System for looking up bands from our time that are relevant and that we gave a s--- about."

For Pepito, kids discovering hardcore through Reign Supreme is "the biggest responsibility" the band has. And when it comes down to it, he would prefer to play to those kids than the kings of a local scene. "Id rather play to the kid that listens to Underoath and Norma Jean but is now into Reign Supreme because all of a sudden he likes our music. I don't want to play to kids who are already into bands like Have Heart and Down to Nothing. They don't give a s--- about us; they give a s--- about the image," he exclaimed. "I want to play to kids who just care about the music and not about anything else."