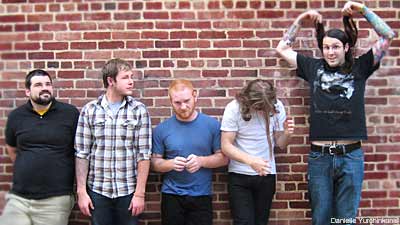 Baltimore, Md. Ruiner will be headlining the Bridge Nine Tour, alongside Strike Anywhere, Polar Bear Club and Crime in Stereo, which kicks off Oct. 2. It's a real HxCx night out for those who like to wear hoodies, mosh, finger point and sing along to socially charged lyrics!

The band will also be supporting its latest release, the gruff 'n' tough 'Hell is Empty,' in the process. The album has been deemed a 'f--- you' type of record full of anger. Vocalist (and resident smart ass, which we here at Noisecreep absolutely love) Rob Sullivan had no real explanation for the seat of the band's ire and fire, saying, "We're white and middle class, so nowhere really!" He also fielded some of Noisecreep's most burning questions about the tour and his band.

The one reason hardcore fans should check out the tour: "Chances are, when you put this many egos on one tour, you are bound to see an onstage fight. That alone would force me to check out a tour like this. At some point, someone is going to drink entirely too much beer out of someone else's dressing room. Or maybe one of the bands will be shortened a few towels and feel they are paid way too much to deal with that."

The one reason hardcore fans should check out 'Hell is Empty': "Because Have Heart are breaking up and Crowbar didn't release a new album this year. So why not spend that extra income -- you could save, being we are in a recession and just download it -- and go buy it?"

On Balticore and its burgeoning scene: "I'm not really sure what 'Balticore' is. We are from a city called Baltimore, which has really neat bands like Pulling Teeth, Surroundings, Deep Sleep and Trapped Under Ice, which are all swell. I'm not sure where this 'Balticore' is. Is it in the Netherlands?"

Insight only a band who worked with J. Robbins, of Jawbox fame, could offer: "Well, when you are as untalented as most bands are today, you need a producer who really knows how to use Pro Tools. For anyone who is not in 'the know,' that's how most bands make themselves sound professional. You need a guy like J. Robbins to help you perfect the art of cloaking your inability to play your instruments. He is very good at that."