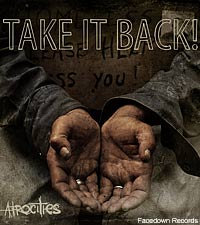 Take It Back's third release on the Facedown Records imprint looks simple on its surface, literally. It was done by the label's in-house artist, Dave Quiggle. Quiggle is known more for the tattoo-influenced artwork he's done for scores of bands, from Throwdown to Living Sacrifice to Sick of It All -- so a cover with photogaphic illustration isn't usual fare from him.

"The band wanted the concept of the album's title, 'Atrocities,' to be conveyed through images of a homeless man in the midst of a city," Quiggle told Noisecreep. "I was given a series of photographs taken by Mykel Hosek with the concept of making this album's artwork more photographic.

"The original photos were very clean and bright, so it was my job to turn out the lights, in a way ... From the series of photographs, I chose the cover and additional images and set the tone in color and texture to fit the concept."Quiggle believes the art reflect the theme of the lyrics and album title. "'New Empire' is the first track on the album," Quiggle explains further. "And speaks of how, as a nation, we're more interested in expanding our power rather than taking care of our own suffering people. On another song, 'Hollow Eyes,' the lyrics speak of how invisible the homeless are to us.

"When you constantly hear that the United States is the richest nation in the world and then see so many ignored and starving," Quiggle intimates. "You start to get the idea of what is atrocious."

Download Take It Back! Songs
Filed Under: living sacrifice, LivingSacrifice, sick of it all, SickOfItAll, Take it Back, TakeItBack, Throwdown
Categories: News
Comments
Leave A Comment
Back To Top