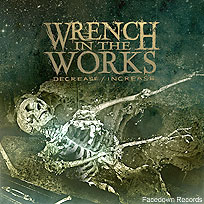 Facedown Records' Wrench in the Works see their second release in 'Decrease/Increase.' The Hartford, Conn. band, as with most bands on the label, had resident artist Dave Quiggle man Photoshop for this release.

Quiggle also did their previous release, 'The Lost Art of Heaping Coals,' which is far busier, visually. 'Decrease/Increase' shows an open casket which reveals a broken skeleton. Are its off to the side or are they raised up?

Noisecreep last covered Quiggle in 'Album Art of the Week' for the artwork he did for Take It Back!'s 'Atrocities' release. Like that release, this is photograph-based illustration, something that Quiggle has been doing more of. A quick glance through his large body of work from the past shows more tattoo-style illustrations, with thick black lines and solid colors. Only recently has he been exploring more realistic mediums in photographs and digital manipulation.

Wrench in the Works have some shows scheduled in the New England area in the coming weeks to support 'Decrease/Increase'.