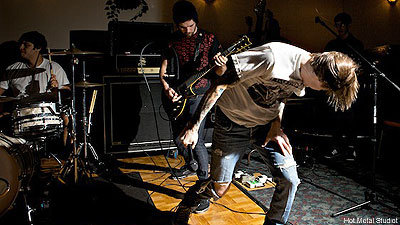 While on tour with Endwell and Legend during the frigid latter months of 2009, Rise Records' Continuance left guitarist Max Hatlem behind to prep new songs. They remained a four-piece for the entire tour. "And I was like, 'Well, I'm not going to be too stoked, just to be honest,'" drummer John Saad told Noisecreep. "Just because all of our parts are really second guitar parts. There's that bass and there's that guitar part right over it that makes it really shine, really come out. And you can't really get that with one guitar player."

The transnational band (members are from the American Midwest and Canada) had just signed to the label and were clamoring to have enough solid material down for their full-length debut, due out spring of 2010. "We're really having to sacrifice some parts and stuff like that. But he's at home right now, doing his best to write," Saad commented.

While the logical thing to do would involve bringing on a substitute for the second guitar, that option wasn't feasible given the time frame. The decision to use only one guitar was made only two weeks before the first date of their tour. "We had some friends that we thought about doing it, but you know, two weeks is short notice," Saad continued. "They have jobs. It's not going to be easy to do that. It's not often that we have talented guitar player friends that aren't in school and that have nothing to do that can just hop on tour with us."

Thanks to technology, a single skilled musician can document song ideas via a computer, which is what Hatlem was doing for the writing process. "[Max is] the guy that pretty much writes everything, just to be honest," Saad said. "He's basically got an interface and then he's got a mic, and he records through Fruity Loops ... We all collaborate on all the songs. If there's something we think would sound better, we just kind of jam it out and see how it sounds. But Max is the guy that pretty much sparks all the music, and it's pretty cool."

Saad mentioned that Hatlem played guitar in Saints Never Surrender, and that he wrote all of the songs in that band at the tender age of 17. "He's a very talented guy," Saad said proudly of his bandmate. "Continuance is slightly different from Saints. That was a good time for those guys, but they're wanting to move on to something a little different, and Max is super stoked about the product of Continuance, so we'll see how that goes."

Continuance are currently on a nationwide tour with Ambush! and Take It Back!