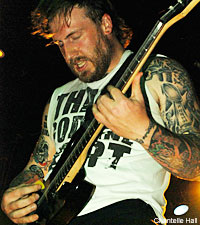 "I love everything associated with this band."

Those were words of the affable Once Nothing vocalist Todd Lowry, at the band's final show at the Altar Bar in the Strip District of Pittsburgh on Sunday, April 5. Fitting nicely into the self-designated "blue collar metal" position on Solid State Records, they only released one album on the label and still held big sway in the local scene. The legions of fans there to say farewell was proof positive of their influence.

Once Nothing's free agent members are already busy with other things. Guitarist Geoff Jenkins is now doing vocals for Gwen Stacy, and bassist Steve Lucarelli will be the fill-in for the low end for War of Ages this summer.

As for starting another band or project? "I don't know if I can really talk about them right now," Lucarelli explained to Nosiecreep. "I guess other stuff will just come out in time. You'll still see us around."

Download Once Nothing Songs
Filed Under: 737109, Gwen Stacy, GwenStacy, Once Nothing, OnceNothing, war of ages, WarOfAges
Categories: News
Comments
Leave A Comment
Back To Top