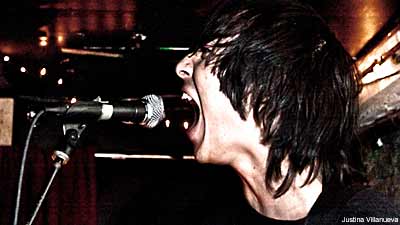 You never know what angry thoughts might make it our of your bedroom. Mike Keller, former guitarist for the Red Chord and N.A.M.E., had just that small revelation Saturday night as he realized his longtime solo project became a performing band at The Charleston's small basement.

"Before this, I was in a band. And before that, I was in another band. And before any of that, I had a solo project called Meek Is Murder where I recorded a bunch of songs I wrote in my bedroom. I never thought they'd be played live, but here we are."

After a slew of bands (including Artillery Breath, Locusta and Regain the Heart Condemned) deafened two dozen or so people, it was past midnight -- the punk/metal bar's show curfew. Meek Is Murder still played, however, as a full band with drummer Frank Godla (Empyreon, Dividing Light) and bassist Sam Brodsky.

The moldy cement floor was dressed in Christmas tree lights Keller bought from the dollar store. I was anticipating loud vocals, since the only other time I saw MIM was at their practice space. They don't own a PA, yet Keller's screams were still audible over the grinding instruments.

Most of the songs they played were Napalm Death's 'Scum' speed. After what seemed like a couple minutes, Keller said, "That was five songs." For the band's first show, they eased the crowd in before they spun the room with breakneck energy, jumping into a sea of friends and fans who have followed Keller along the way.

If you like Daughters, Converge or Trap Them be sure to check out Meek Is Murder. You can download the EP for free if you message the band on MySpace.