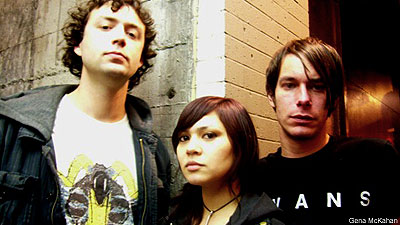 The Abominable Iron Sloth's latest, 'The Id Will Overcome,' came out on April 27, and the West Coast trio slathers their minimalist distortion with sludge on the album, which was released by Black Market Activities, the label of the Red Chord's Guy Kozowyk. Guitarist/vocalist Justin Godfrey and drummer/live guitarist Andre Sanabria have no beans to spill about Kozowyk, as they've not even met him ... yet!

"F---, not really," Godfrey told Noisecreep when asked about working with a fellow artist. "It's been pretty simple and straightforward so far." Sanabria concurred, saying, "I've never personally met Guy, only spoken to him on the phone. He's got a good voice, like a phone sex operator." If you've not heard Kozowyk speak, we can attest to his raspy, sexy-man speaking voice.

Musically, AIS, whose vivid name is certainly a head-turner, is "what late '60s rock would have sounded like had there been a nuclear exchange between superpowers," Godfrey said. Sanabria agreed, saying, "Justin's answer sums it up pretty well. The Iron Sloth is a raw punk rock band, though we don't brandish it on our chests wearing Discharge T-shirts. Banality begets depression begets antagonism begets the Abominable Iron Sloth."

All that begetting aside, the band will be touring through the end of May, deafening fans all across this great country of ours. So what can we expect from the band while on the road? Loudness, couches and ringing ears. "As long as we don't get arrested anywhere, it will be a good time all around. I'd expect a lot of feedback, a lot of screaming and a lot of guys flirting with Aubrey, our bassist," said Godfrey, who intimated -- in true tongue-in-cheek fashion -- that an abominable iron sloth is what he turns into when he gets drunk and is why he quit drinking a year ago.

Sanabria also admitted that "we'll be making ex-girlfriends and will probably see an emergency room at some point. We've recruited another drummer, and I'll be playing second guitar, so s---'s going to sound a lot thicker. You can expect a lot of asking if we can sleep on your couches and "... is this s--- really that good?"

While Sanabria sarcastically joked he is good at finding faults in "just about anything" and that "sloth is a lifestyle. Either you get it or you don't. We are abominations and anathemas in the eyes of the pious, so we embrace that. And we all wear suits made of Iron," Godfrey said, revealing that he spends his free time looking for gold in Northern California, giving new meaning to the historical phrase "go west young man, go west."

"I live in my solar panel-equipped van on my gold claim a few days a week, using a sluice box for recovery, as dredges are currently illegal in the Golden State," he said.