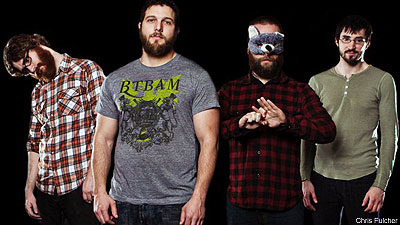 The Red Chord can usually be found touring in the summer and, well, summer 2010 will be no different. The Boston grinders -- and no, we're not referring to a New England sub sandwich -- will lay waste to venues as part of the Summer Slaughter Tour, which begins on July 17.

"New tour, new merch," Red Chord vocalist Guy Kozowyk told Noisecreep about the wares the band will peddle. "Usually the only time we have old merch for a new tour is when we didn't get our new designs back in time. Thankfully -- and not so thankfully -- our European tour got canceled, so we have been home for way too long, and if nothing else, we actually have plenty of merch designs which are waiting to be put to use."

As for the set list, it's a balanced mix of new and old. "I think fans appreciate it when bands make it a point not to get too caught up in their new material to the point where they abandon playing their older song," Kozowyk said. "Even if you think your newest material is the greatest thing you've ever written, the first thing people ever heard by you or whatever they are most familiar with tends to be what they enjoy the most and want to hear." We agree, wholeheartedly.

While summer touring can often suck because of hot, overcrowded venues, Kozowyk has a few tips on how to survive summer touring, saying, "Get a great merch guy that can take the heat, because I certainly cannot. We do our best to make ourselves available to showgoers. But when it's that damn hot, just come say hello outside after the show after the sun goes down."

Once Summer Slaughter wraps, more Red Chord tour dates in the States will ensue this fall, with an attempt to get to Europe in their sights. TRC are also trying to "get everywhere else in the world that isn't the U.S. or Europe. Any non-U.S./Euro people that want to fly us to South America, Australia, Africa or anywhere we have never been, please hit us up. We want to come to you!!

Kozowyk also made a key point about the BP oil crisis when asked, saying, "The BP situation sucks ... but if you boycott BP, you're probably hurting the local guy running the franchise even more than the big corporation. Unfortunately, I don't really have a course of action in mind for that whole situation. As for most other political issues, my political beliefs don't exactly mirror those of the rest of my band, so I try to keep that stuff under wraps when it comes to a Red Chord context. But if anyone cares to talk about politics in a non-Red Chord interview format, I'd be happy to do so, because I do find that stuff really interesting and would love to get involved in some capacity some day."