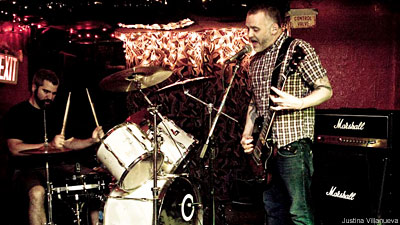 For years, noise rockers Easter were a duo. Just drums and guitar. All it took to make them even better was for guitarist Don Puglisi to put up a flyer in their rehearsal space at Astoria Soundworks. Current bassist Mike Tsouris -- who lived around the corner from the building -- happily responded to their ad and became a strong addition to the band. Drummer Jonathan Gill agrees.

"Unlike the two of us, Mike's had some formal musical training. So now that he's mostly up to speed on our existing songs, I'll be interested to see how he contributes to the songwriting," Gil told Noisecreep.

Puglisi and Gil have been playing music for 10 years. Their previous band Pecados ended when the bassist enrolled in a PhD program in Chicago. For about five years, they explored all their low-end options through trial and error.

"We went back and forth for a long time about whether we wanted/needed a bass player, and considered other options -- maybe have Don's signal split through both guitar and bass amps (like the guitarist from Lapdog of Satan, a great duo), but for various reasons we didn't do it," Gil said.

In spring of 2009 they came to the conclusion it would be best to have a third member. All parties are happy the way things worked out -- including Noisecreep, who got to see the band play with Know Nothing, Hallux and Meek Is Murder on April 29.

Fans of the Jesus Lizard, Unsane and the like should check out their self-released album 'Molt' -- which was recorded by Jason LaFarge of Hallux.