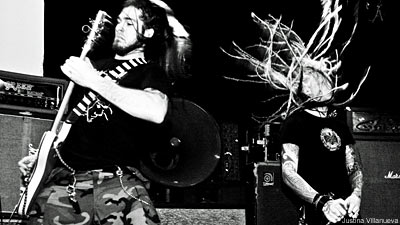 Feb. 28 at Public Assembly was the kind of show where the between-song banter was minimal -- as in someone would say the name of their band and play an entire set without saying anything else to the crowd -- but the decibel quality was at its peak foor Inswarm, Hallux, Malkuth and Radiation Blackbody.

While the larger room at Public Assembly was occupied with girls who worship Betty Paige and guys with pompadours, the room in the back was for us regular metalheads. Radiation Blackbody set off the night with pure aural assault. Their recipe included drums and bass only. It was raw, but mostly it was perfect.

Afterward, black metallers Malkuth played the best set I've seen from them yet. And after watching them at least four times now, that is saying a lot. It was also mostly perfect, until one of the guys had an amp go out on them. Even then, the band finished their set with dignity.

The mean and mighty Hallux played second to last. Their heavy stoner metal set was the perfect set up for Inswarm.

"We got a new drummer. His name is Hal," Inswarm guitarist Josh Lozano said while pointing at the giant horn loudspeaker behind him. "He doesn't look like a drummer!" someone shouted back at Lozano. 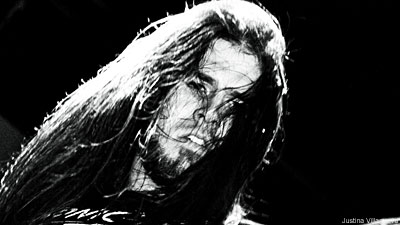 The duo -- which consists of Fade Kainer (Batillus, Jarboe) and Josh Lozano (Jarboe) -- had a wall of amps behind them. The loud sounds that those amps emitted was a mixture of industrial, post-metal and doom. What should have been machine-driven noise was some emotionally raw and fury-charged music. Even for fans of Godflesh and Neurosis, Inswarm's sound is a refreshing take on post metal.

Inswarm's set made me think of what Cosmo Lee of Invisible Oranges said just two months ago: Will someone sign these guys already!

Be sure to check out their 2008 release 'Surely Death Is No Dream.'