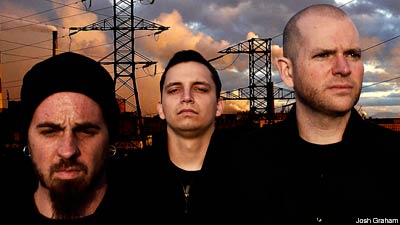 A Storm of Light have confirmed an extensive U.S. winter/spring tour, which launches Feb. 18 in Philadelphia. The doom experimentalists live lineup, however, will differ from the players featured on the band's October-released second full-length, 'Forgive Us Our Trespasses.' Joining founding members, singer and guitarist Josh Graham and former Tombs bassist Domenic Seita on the record is Graham's Battle of Mice cohort, producer and musician Joel Hamilton. When A Storm of Light hit the road, though, drummer Geoff Summers (Batillus) and singer Zohra Atash (Religious to Damn) will join the pair.

"We're sort of expanding our sound, and we want to work with musicians we like," Graham tells Noisecreep. Besides Battle of Mice, Graham's musical resume includes Blood and Time, but the Brooklyn, N.Y.-based musician and artist is perhaps best known for his visual design work for Neurosis.

"We wanted to work with Joel in a larger capacity, but he's too busy to tour. He just recorded that Blakroc record, which is the Black Keys and Mos Def, so he's super busy. We have that wonderful musical kinship and relationship, so it's awesome to work with him and have his contribution in the studio."

Rather than restrictive, Graham says Storm of Light's tight two-member creative core is very productive. "The first album was like a reaction against playing post rock and a reaction against being in a band that worked with a five-member democracy. It was so difficult to write. With Dominic and I, it's so easy. We get out so much material. For the first album, I wanted to keep it totally paired down. Then, when the second full-length was coming together, we decided to use whoever we want to. Every tour that we've done, the lineup has been different. It makes touring fun."