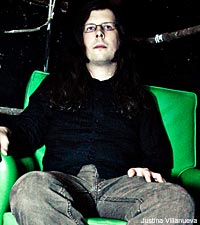 The Stone is a venue owned by the renowned musician John Zorn. It sits on the busy Alphabet City corner of 2nd Street and Avenue C in New York City. With the exception of one wall covered in a mosaic of large black and white prints of performances, The Stone is pretty boring aesthetically. The walls are white and clean, and when performances begin, there are just a couple of white lights on the musicians. So when there is a quiet performance, anything can be distracting (like the loud roar of the old heater cranking up or the traffic just out the door). There is no bar. There is no food allowed. There is no moshing.

Sounds like the perfect place for an instrumental solo project, eh? At least it was the perfect spot to watch Dysrhythmia's Kevin Hufnagel. You might know the guitarist from his work in Gorguts, Byla and from a guest appearance on Jarboe's 'Mahakali.'

On Feb. 16, Hufnagel played some beautiful, yet dark songs. Unlike his solo albums, there were no drums or guest bassists. It was Hufnagel alone with a nylon-stringed guitar on his lap (and three other guitars behind him). The contrasting rhythms in his songs will give you the chills.

"This new song is actually a brand new Dysrhythmia song," Hufnagel said. He added that when he originally played the Dysrhythmia song for his bandmates, bassist Colin Marston said, "That actually sounds like one of your solo songs."

Despite there not being a wall of amps, a giant six-string bass and drums bellowing like a jackhammer in your ear, his set was still menacing. Through complex melodies, Hufnagel projects strong and simple statements. And like the true virtuoso he is, Hufnagel does it all using unusual techniques.

You can buy Kevin Hufnagel's 'Songs Through The Disappeared' directly through his MySpace page for $12 if you live in the U.S. and $14 if you live anywhere else.